A soup good enough to stop a war seems worth trying, don’t you think? As I had never heard of Milk Soup before, I looked on-line and found a few recipes: Milk Soup Recipe in SRF (german), Reform Church of Zug (german), Lehrmittelverlag des Kanton Zürich (german), and Helvetic Kitchen (a terrific source of traditional Swiss recipes in English). As there is no ‘original’ recipe for this soup, all of these recipes are interpretations and each a little bit different. What they all have in common though, is milk, bread, broth, butter, garlic, onions, and herbs. Finally, most also add a garnish of grated hard cheese (Gruyere, Sbrinz, or other hard Alp cheese). Using these recipes as a guide, I made my own interpretation of this soup to see what it was like.

So what was it like? It was decent – it had a good garlic, onion, and herb flavor and the cheese garnish (I used sbrinz) on top was a perfect addition. I went with the rustic texture, which was, perhaps, a mistake. I think pureed (as some of the recipes recommend) would have been better. Good enough to stop a war? Well, I would certainly prefer to eat this soup than fight in a war, but it isn’t something I will be adding to my regular meal rotation. That said, I do think it would serve very well as a small starter (meal and/or conversation). If you’d like to give it a try for yourself, here’s how I did it.

I mostly followed the recipe from Helvetic Kitchen, although scaled down a bit and with slightly different herbs. To start, I gathered my ingredients, cubed the bread, diced the onion, and minced the garlic.

I set a pot on the stove over medium heat and sautéed the onion in the butter until soft. I added the minced garlic and sautéed until just fragrant. When it smelled good and garlicky, I added the bread cubes and sautéed them a few minutes. I added a touch more butter to make them a bit more crouton-like.

I then set aside a few cubes of bread to use as a garnish later and added the milk, broth, and herbs.

I liked the herbs used in the SRF and Lerhmittag recipes, so went with those (bay leaf, thyme, clove, nutmeg, salt and pepper). I think this was a good choice, as I was happy with the flavor of the soup. After bringing the soup to a boil, I lowered the heat to a very slight simmer and let it cook another 8 minutes or so. Just long enough for the herbs to infuse the soup. The soup thickened quite a bit and as I didn’t want it too thick, I took it off the heat. I removed the thyme sprigs and bay leaf and got it ready to serve.

If you want a smooth velvety soup, you should purée the soup now. I didn’t purée it, which seemed more appropriate for 1500’s battlefield soup, but if I make this again, I think I would purée. The rustic texture was interesting but, I think a smoother soup would be more palate pleasing. To serve, I garnished the soup with the reserved bread cubes, chopped chives, and freshly grated cheese.

Here, I’ve served it with a mixed-greens salad. Oh and, one more thing – I completely agree with the recommendation from Helvetic Kitchen that this soup is best served with a nice crisp white wine to drink. 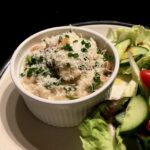