Heard Irene Cara’s “What a Feeling” the other day and it brought on some serious nostalgia for me – that song always reminds me of Pittsburgh and late nights at Eat’n’Park diners. It was there that I was introduced to the amazing concept of putting hot crisp french fries on salad a.k.a. a Pittsburgh salad. With travel an impossibility right now, I won’t be getting back to the United States, much less Pittsburgh, anytime soon. Needing to satisfy a craving, I decided to make myself a Pittsburgh salad for dinner and, of course also decided to post the recipe here.

This recipe is for a very basic Pittsburgh salad – iceberg lettuce, cucumbers, tomatoes, egg wedges, cheddar cheese, a fried chicken cutlet, and of course, french fries. As for the dressing? My favorite is blue cheese, but any dressing you like works. If you wanted a fancier salad, you could use mixed greens, add some shredded carrot, maybe some chopped celery, or sliced radishes. Go wild, the more veggies the better. If you want a healthier option than a fried chicken cutlet, grilled chicken breast or steak are also excellent. Only the french fries are truly non-negotiable. They are what make it a Pittsburgh salad after all!

To make the salad, I start by chopping the lettuce, tomatoes, cucumbers, and hard boiled egg. Part of the joy of this salad is the contrast between the hot fries and the cool salad greens so I want the cool ingredients ready for when I take the fries out of the fryer.

Next I prep the chicken cutlet and fries. For the chicken cutlet, I first dredge it in flour (seasoned with salt and pepper), then egg wash, and finally coat it with bread crumbs. I then deep fry the cutlet in vegetable oil for few minutes until golden brown and cooked through. I don’t have an oil thermometer (I should), so can’t give an exact temperature here, but I’m using a medium high heat and I test the oil by dropping crumbs in to see if it sizzles nicely before adding the chicken cutlets.

When the chicken is fully cooked and golden brown, I set it aside on a rack to drain while I make the fries. I’m using pre-cut french fries and simply deep-frying them according to the package instructions. This may not be the ultimate way to make french fries but they will most certainly taste Eat’n’Park authentic. After I take the fries out of the oil, I make sure to give the them a good hearty sprinkling of salt.

Now for the final assembly. First, I Pittsburgh up this salad by tossing a handful of hot fries on top of the lettuce and veggies. Then, I slice the fried chicken cutlet on the diagonal, and place it on top.

Normally I would top it all with a sprinkle of shredded cheddar cheese, but my son ate all the cheese the night before. As I don’t care for the one brand of cheddar they sell at my local store (it’s fine for cooking, but not a great salad cheese) and I didn’t have time to go the British Cheese Shop to get the good stuff, I just left the cheese off the salad. With some dressing on the side, it is ready to serve. 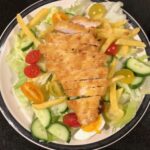 A classic Pittsburgh salad topped with french fries, just like you might get at Eat'n'Park. This recipe doesn't inlcude exact amounts. It is a salad and for the most part you will want to add as much or as little of an ingredient as you like to eat.
Prep Time30 mins
Course: Main Course
Keyword: Chicken, Salad
Servings: 4 People