When my husband joined twitter back in 2009 or so, one of his first followers was the website ObamaFoodOrama (now subscription only) – also known as “The Official Site of  Record for Obama White House Food Initiatives,  From Policy to Pie.” Assuming they had followed him in error (my husband and the then White House Chef have the same name) he let them know he was not the White House Chef. They replied “We know! We are just big fans of Rock-Paper-Scissors-Lizard-Spock.” They had the right Sam Kass after all!

After that, of course, we had to check out their website and one of the first things I found on it was the Obama family chili recipe. Easy, delicious, and nutritious (no surprise there, given Michelle Obama’s advocacy), it was an immediate hit with my family. And, now more than ten years later with only a few minor changes, it is still in my regular meal rotation. This recipe is a keeper, for sure.

Like so many recipes, this one starts with chopping the vegetables, in this case mincing the garlic, and dicing the onion and bell pepper. The Obama recipe called for a green bell pepper, but over the years I have used every color of bell pepper (green, yellow, orange, red) just depending on what I had in the fridge. They all work well, but I do have a slight preference for the red peppers.

Make a mixture of the dried spices and add them to the ground meat. For the chili powder, I like to use an ancho chili powder that I bought in the US. When I don’t have my favorite chili powder, I simply use the one that is easy to get (Coop brand chilpulver).

Add the tomatoes. If using canned whole peeled tomatoes, crush the tomatoes with the back of the stirring spoon, or with a potato masher to help break them down. Then, add the red-wine vinegar.

Let everything simmer for about 10 minutes until the tomatoes are fully broken down and completely incorporated. Then, stir in the kidney beans and cook until the beans are warmed through – another 10 minutes or so. Give it a taste and add salt or pepper if needed.

Serve over rice with any of the suggested garnishes – avocado, diced onion, shredded cheese, sour cream, etc. We love this simply, easy chili, and I bet it will become one of your favorites, too. 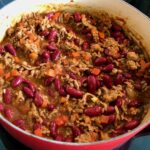